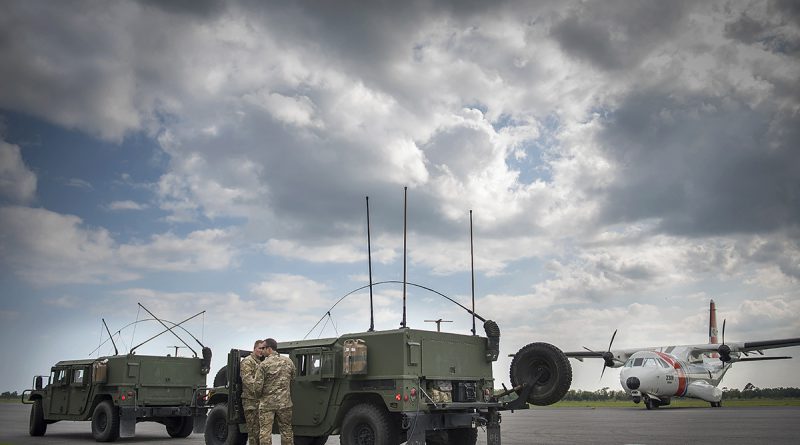 They act as liaisons between aircraft and SAR teams on the ground.

“Our mission is to talk to airborne control platforms so that we can relay them information the Coast Guard here on the ground need to relay to the helicopters for the search and rescue efforts and vice-versa,” said Senior Airman Austyn Hawkins, a Sulphur native with the Tactical Air Control Party.

TACPs work from their humvees which are equipped with a wide range of radios that allow them monitor a multitude of frequencies. This equipment enables them to receive messages from an airborne warning and control systems about ongoing rescue missions, such as locations for helicopter loading zones, if the loading zones are accepting patients and coordinates of survivors in need of rescue. The team will relay this information to the Coast Guard where it is documented and pushed to the SAR teams.

“I was informed yesterday this particular location had about 100 rescues,” said Master Sgt. Mark Simpson, a West Lake native with the TACP. “Most of the rescues were in Port Arthur and Houston. These rescues ranged from infants in critical condition, women in labor and senior citizens with emergency medical conditions.

For Hawkins the mission became personal when his grandmother had to be evacuated from her flooded home in Orange, Texas.

“It wasn’t the storm that was the big deal, it was the water that came off of the Sabine River once they opened up the dams in Toledo,” said Hawkins. “She went to her neighbors for the time being and from there her and her dog got picked up.”

Hurricane Harvey’s devastation reached far and wide, which requires a large number of air assets into a single location for an extended period of time. Communications support for SAR efforts is the TACPs primary mission for Hurricane Harvey’s disaster response but they also fulfill a role in the safety for those involved in rescue operations. Information on aircraft and load zones needs to be accurate, precise and timely to avoid any midair mishaps. “Yesterday, we had approximately 74 helicopters in the air at one time,” said Hawkins.  “Some of the Coast Guard pilots I talked to here on the ground were saying that they were actually having to visually acquire the aircraft, keep their heads on a swivel to avoid collisions.”