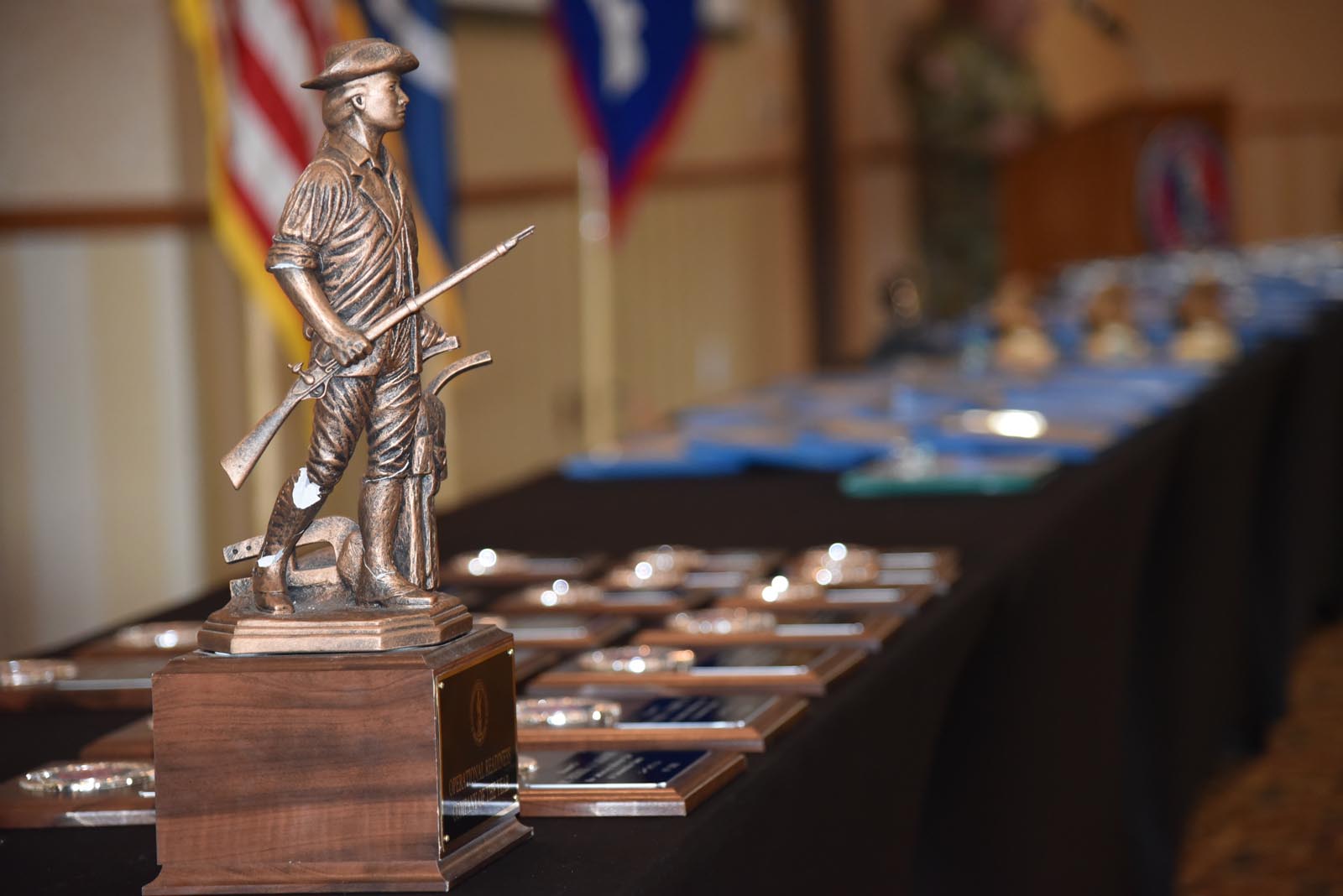 PINEVILLE, La. – The Louisiana Army National Guard’s (LANG) Recruiting and Retention Command (RRC) hosted an awards ceremony for soldiers at the Country Inn and Suites in Pineville, Louisiana, Feb.16, to honor soldiers who displayed skills, dedication and professionalism beyond what is required by the recruiting and retention goals of the LANG.

In striving to reach their best, the soldiers help increase the effectiveness of the units, the command, and the entire LANG.
“Whether you realize it or not, your jobs of recruiting and retaining the soldiers of the LANG is essential in our ability to deploy in support of our nation’s missions as well as our ability to support the great citizens of Louisiana during all-hazards events,” said Lt. Col. Marc Prymek, the RRC commander and Shreveport native. 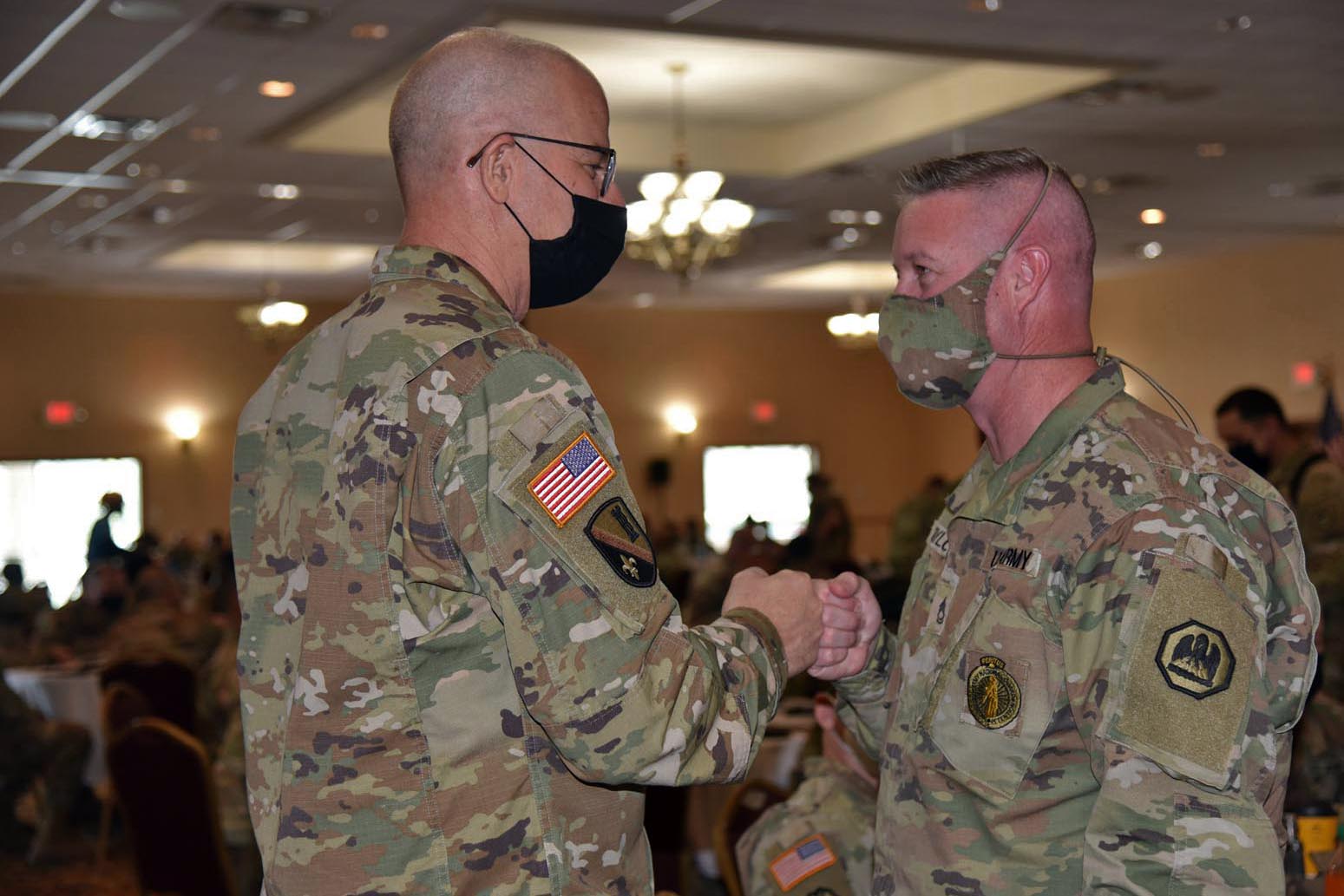 Master Sgt. David Melendez was presented the Section Chief of the Year award, receiving the Meritorious Service Medal and the noncommissioned officer (NCO) sword for distinguished performance and outstanding achievement.

Staff Sgt. Joseph Reagan was the recipient of the Recruiter of the Year award, the Top Recruiter Eagle Trophy and the NCO sword. These awards are not only based on the number of enlistments achieved, but under the total soldier concept. Reagan achieved more than 227 percent of his assigned recruiting mission and exceeded his recruiting goal by 23 accessions.

Having achieved 18 basic branch appointments and accessions during 2021, the Officer Recruiter of the Year award, Meritorious Service Medal and officer sabre was presented to Capt. Robert Yokum, an officer strength manager for the LANG.

The Recruiting Sustainment Program (RSP) NCO of the year, Sgt. 1st Class David Fusilier, was awarded the ARCOM, recognizing him for the highest overall RSP metrics. Fusilier’s dedication led to Detachment 7 being the highest ranked recruiting site in the state.

“Recognizing and honoring the extended performance of our soldiers not only shows our appreciation but it serves as positive reinforcement to continue those efforts,” said Prymek. “The presentation of awards remains one of the most time-honored, cherished, and sacred traditions in the military.”

Each year the RRC hires new recruiters and, during their first full year, they work diligently to achieve outstanding mission success and compete to earn the title “Rookie of the Year” for the most enlistments achieved. This year, Sgt. Dillon Stewart won the title with 23 qualified enlistments, with a mission set of 16.

In spite of all the challenges during the pandemic, soldiers in the LANG figured out a way to overcome obstacles. Three accomplishments highlighted during the ceremony were the LANG’s retention rate of 86 percent, officer accessions rate, and overall accessions rate placing LANG within the top five states in the country.

“When we go to National Guard Bureau and we talk to the chief or the directors, one thing they always talk about is how great of a job recruiting does in Louisiana,” said Maj. Gen. Keith Waddell, adjutant general of the LANG. “Soldiers in this organization always have a knack for figuring out how to overcome obstacles.”