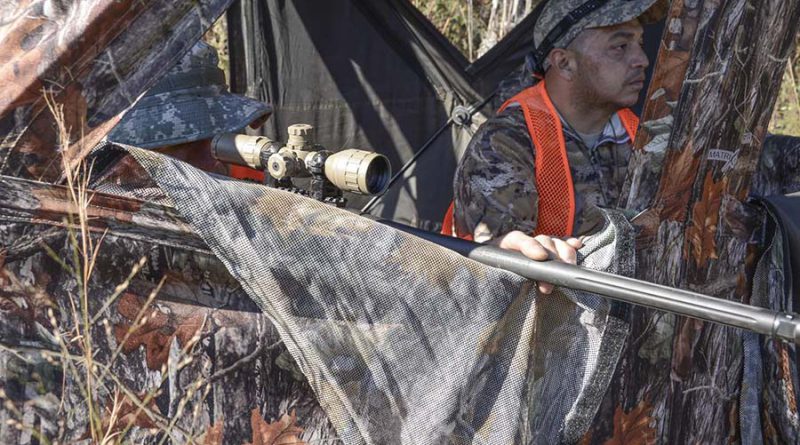 PINEVILLE, La. – Veteran’s Day is a time to honor those who have served and those who are still serving in the United States Armed Forces. All over the country one can find parades, concerts being held and meals being given to those men and women.

For the fourth year in a row, the Louisiana National Guard teamed up with the Louisiana Department of Wildlife and Fisheries, Hunters Enriching Lives of People and the Combat Veterans Motorcycle Association to host the annual Disabled Veteran’s Deer Hunt at the Camp Beauregard Wildlife Management Area near Pineville, Nov. 10-12.

A total of 21 veterans came out this year to participate including 11 veterans who drove all the way from Florida and one from Alabama.

The weekend is considered a lottery hunt. The hunters submit an application through LDWF, and each application is screened by a doctor with HELP to determine qualifications. The number of hunters has grown from 14 participants last year to 21 this year.

“HELP is an organization that was started in Sabine Parish,” said Carl Chance, vice president of HELP. “Our goal is to give these veterans a quality outdoor experience. Many times it’s the only time they get a chance to get outdoors and really build a connection with other veterans that may be going through something similar.”

The LDWF works closely with the LANG range control to coordinate the location of the hunt and set up the blinds, as well as handling the logistics of transporting hunters to and from the sites and housing the hunters.

HELP provides necessary equipment, such as attachments to steady a rifle, to make hunting easier for veterans in wheelchairs.

HELP President Bradley Marr says that HELP provides the money for everything that may be needed over the weekend. Marr and Chance also explained that HELP is wanting to put up permanent stands to make the hunt more accessible for handicapped hunters. “The goal is to have permanent stands up so the game can become used to the stands being there,” said Chance. “With these permanent blinds it will be easier for a veteran with a wheelchair to move around in the blind. It also allows for veterans with handicaps to have more independence while hunting.”

HELP and LDWF are hoping to have the permanent stands in place for next hunting season.

The CVMA provided meals for the hunters and volunteers throughout the weekend. The veterans used meal times to socialize with the other veterans. The weekend was not only about hunting, but getting together and honoring the veterans.

“I’m humbled every time I get to shake the hand of a volunteer. It’s the little things that matter,” said Aaron Davis, a Navarre, Florida native and an Air Force veteran who participated in the hunt. “These events are about connecting with other veterans. I see some of these guys in a meeting every month, but being out here and just sitting in the woods talking allows you to really connect. Being out here with other veterans and seeing their struggles really help keep my problems in perspective.”

Each hunter is allowed to bring a guest to help them or to just sit with them while they hunt. If a hunter doesn’t have anyone to sit with them, one of the volunteers will join them. The volunteers want the veterans to see they aren’t as limited as they might think.

For veteran brothers, Chris, a New Iberia resident and Juan Rosales, a Baker resident hunts like these have helped them interact with other people outside of their families.

Chris explained if it wasn’t for therapy and hunts through organizations like HELP, he probably wouldn’t leave his house.

“This brings out the better part of me,” said Chris. “It brings me back to who I was before the deployment. These events mean a lot. It really shows the support from the community and sometimes as veterans we don’t really see the behind the scenes support. Being out here with other veterans helps me because it’s just easy to talk to them, and it makes me want to get more involved, more out there; whereas before all I would do is keep to myself and stay home.”

The secretary of LDWF waives the hunting license for the veterans that are participating in the hunt every year. The hunters are told at the beginning of the hunt that they are allowed to shoot one antler and one antlerless deer, hogs and coyotes.

This year with the sun high overhead and the weather cool, hunters shot an eight-point buck, a doe, a three-point buck and a coyote. Juan who shot the eight point had a smile on his face when the deer was brought in.

“I didn’t know what to expect. I didn’t know what I was going to do when I saw him,” said Juan. “I wasn’t sure I would get him. As soon as I saw him drop; I knew I had him. It means the world to me that my brother was here with me. I just wish he would’ve got one as well.”

Juan explains that getting his first deer wasn’t the best part of the weekend; seeing his brother smile was.

The weekend gives veterans the opportunity to gain new friends and memories as they trade stories. The volunteers also get an opportunity to show appreciation for what the veterans. The organizations hope the hunt will continue to grow, so that more veterans can benefit from it.

“Sometimes we get to a dark place and these events help pull us out of those dark places,” said Juan. “HELP and other organizations that do these events help us see that we are not alone, and that if you need help there are people willing to talk to you at any time. These events do more for me than any medication or physical therapy can do; just by letting me know somebody is there.”