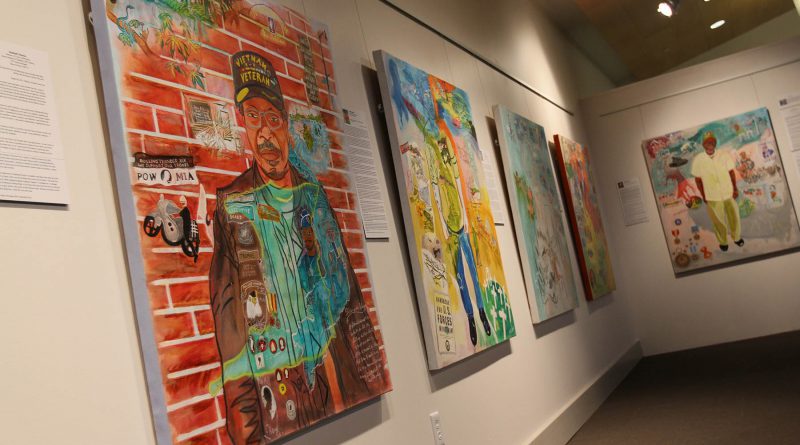 NEW ORLEANS – The Louisiana National Guard’s Ansel M. Stroud, Jr. Military History and Weapons Museum at Jackson Barracks in New Orleans, will host a grand opening of an art exhibit by Nina Talbot entitled “Veterans” on Nov. 11 from 2 – 5 p.m. The event is open to the public.

Talbot is an internationally recognized Brooklyn-based artist that painted a series of 26 portraits of Veterans. The museum’s exhibit will feature 12 of the pieces for the next year.

One of the portraits is of the Louisiana National Guard’s own Chief Warrant Officer 2 Andrew Le, a resident of New Orleans.

Talbot’s art has been shown around the world, including in the U.S. Army Heritage Education Center in Carlisle, Pennsylvania, the U.S. Department of Veteran Affairs Museum in New York, and the Polish Jewry Heritage Center in Dynow, Poland.

Maj. Heather Englehart, director of the LANG museums, expressed immense gratitude when discussing the resources Talbot generously contributed to ensure that the museum would be able to showcase this series.

“I am absolutely thrilled,” said Englehart, who said that this is the first painting-centric exhibit the museum has hosted since Hurricane Katrina destroyed the museum in 2005. “We have an amazing opportunity to showcase an internationally recognized artist while simultaneously featuring our own Louisiana Guardsman.”

Talbot’s paintings tell the story of the subject by incorporating events from their lives into the painting. She uses oil paint on canvas, but thins her paints so that her finished paintings closely resemble watercolors.

“I take the most significant elements from stories that my subjects tell me about their lives,” said Talbot, “and make sketches based on the highlights of the stories and then those sketches are incorporated into the portrait. It’s almost like a window looking into this person and what formed them.”

Talbot said that she worked on several different series leading up to her Veterans series including one on people in her community in Brooklyn.

“The paintings come to life when you read the bios that Nina writes to accompany them,” Englehart said.

The Louisiana Guardsman featured in the serious, Le, was born in 1970 during the Vietnam conflict. In 1978, his father bought a 60-foot boat for their family of nine, as well as around 60 other refugees, to escape to the Philippines. During the two-month trip, many people died, including Le’s baby brother who was born at sea. After arriving in the Philippines, the Le’s lived in a refugee camp where they survived on a ration of one bag of wheat per week.

After a year in the Philippines, Le’s family was sponsored by a family in Aliceville, Alabama and moved there. Le said that they felt safe in Aliceville even though they were the only Vietnamese family in the town. At 9, Le said school was “traumatically difficult” as he didn’t speak English and had to take English Second Language while other children his age were learning other subjects.

The Le’s moved to New Orleans in 1980, where Le’s parents worked at a local bakery. He continued school there until receiving a scholarship to Louisiana State University. Le eventually joined the Guard. He has deployed to Iraq once and Afghanistan twice with the 415th Military Intelligence Battalion, and has been part of every hurricane response since he began his military career.

Talbot’s portrait of Le consists of sweeping strokes of blue, green, yellow, red and pink and incorporate his life, from his family’s escape from war-torn Vietnam when he was eight, to their time in a refugee camp, to his family’s move to New Orleans in 1980. Le said that he was humbled to be chosen as a subject of one of Talbot’s portraits.

“My family has been very blessed,” said Le. “America truly is a country where you can be successful if you put in the work.”

The exhibit will also feature two artifact cases with personal and military items from Le and Sgt. 1st Class Jeffery Richard, a resident of Many, La.

Richard, much like Le, found himself facing many trials and tribulations that ultimately led him to the military.

At age seven, Richard said that he and his siblings lost both of his parents to suicide and were left dehydrated and starving in a hotel room for days. Once discovered, the children were separated and he was sent to a low-income home of 14 people.

“As a young orphan, I was neglected and often abused,” he said. As a result, Richard missed most of his second grade year of elementary school.

Richard said that his turning point came when his uncle, who was military police in the Army, came home and became his mentor. “I became an honor student and top athlete through middle and high school.”

He said that he was eventually elected student president and voted most likely to succeed by his class. Richard served in the U.S. Marine Corps for 10 years following high school and completed tours in Japan, Bosnia and on the USS Roosevelt.

In 2003, Richard joined the Guard, where he was finally able to achieve his lifetime goal of becoming an MP like his uncle, who began mentoring him over two decades ago.

Richard is currently the assistant operations non-commissioned officer of the 773rd Military Police Battalion. He deployed to Iraq in 2007 in support of Operation Iraqi Freedom and was activated to support Hurricane Katrina, the 2010 BP oil spill and the 2012 Mississippi River flood.

“I think it’s important to showcase Veterans artifacts in museums,” said Richard. “Generations that follow us may see our history and accomplishments, and maybe they can use those things as motivational tools in their life.”