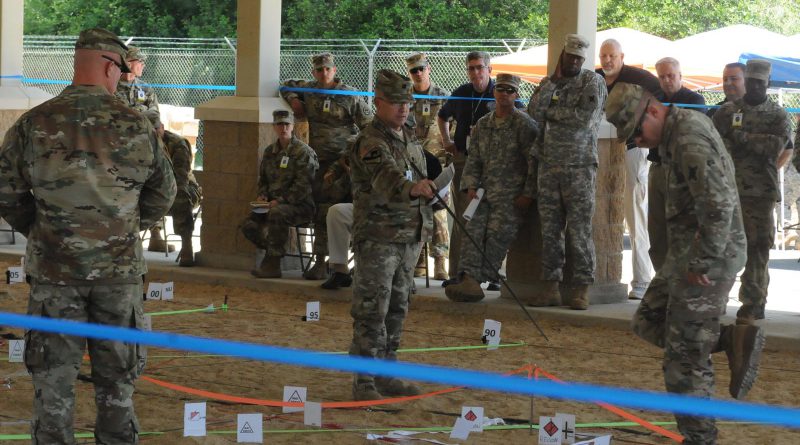 The Warfighter exercise is a two-week command and control exercise to test and evaluate a headquarters reaction, and methods of battle relating to its management and execution abilities, through a virtual battlefield.

“What you are doing here is important and is your professional responsibility to pass it on,” said Gen. Robert Abrams, commander of the U.S. Army Forces Command. “It is better that we learn the hard lessons in training than elsewhere.”

“The Army as a whole is getting away from counter insurgency and moving to a near-peer threat and we haven’t seen training like this since before 9-11,” said Capt. Mitchell Champagne, Headquarters and Headquarters Company 256th IBCT commander. “This exercise has us flex our mental muscles and think about the battlefield in a new way.” The 256th IBCT began combat operations to push the opposing force out of the country and assist the invaded nation secure its internationally recognized borders. Role players assisted the units with the processes of working with host nation and nongovernmental organizations during the exercise. The Warfighter exercise tested the 256th IBCT’s staff members’ reactions to events in combat and their abilities to execute mission command.

“We are able to effectively maneuver this brigade with less resources than we think,” said Lt. Col. William Rachal, commander of the 256th IBCT.

“As a lower enlisted, you don’t really see that bigger picture,” said Pfc. Tori Gibson, a signal systems support specialist with HHC, 256th IBCT. “I feel like I have a better understanding of things now that I get to see the bigger picture and do my job in a more real situation than normal.” Next year the brigade will participate in an eXportable Combat Training Capability exercise at Camp Shelby in Mississippi, which is a field training exercise designed to certify platoon proficiency and used to check on the organizations progress over the last year.

Capt. Patrick Boiling described warfighter as a step in the process to developing an organization to an optimal level for XCTC.

“We need to be prepared to deploy tomorrow,” said Boiling, brigade chief of recon. “Warfighter prepares us for XCTC then JRTC, which is the final exercise before the unit is deployment ready.”