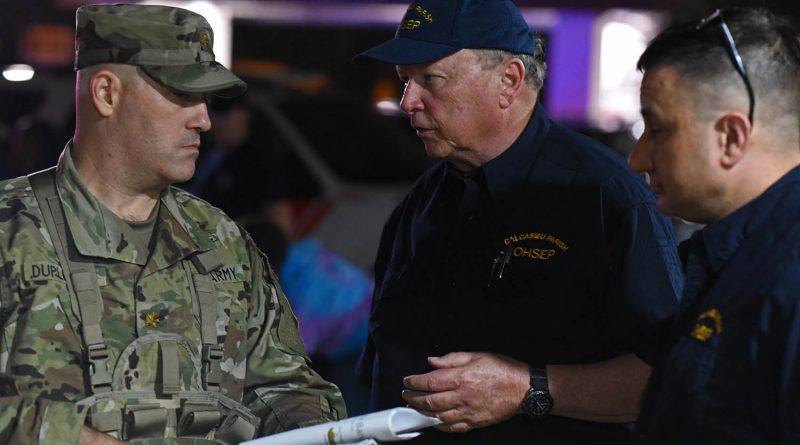 Altogether, 3-156th assisted the Lake Charles Fire Department, Calcasieu Parish Sherriff’s Office and the Department of Wildlife and Fisheries in the rescue of more than 450 citizens and 12 pets throughout the night in response to Hurricane Harvey, which has been downgraded to a tropical storm.

It was a team effort by the local agencies.

Two LANG boat teams and high-water vehicles were used to assist the parish with evacuations from a neighborhood that flooded and other calls for assistance.

Duplechin, a Lake Charles native, said he has four boat teams in the area and several high-water vehicles ready to respond to calls for assistance as they may come quickly as bands of rain move through the area.

“In the next 24 hours, I think they predicted anywhere from 5-10 inches of rain,” said Duplechin.  “So it just kind of depends on when those bands hit and where.”

The LANG currently has approximately 375 Guardsmen activated in parishes around the state to respond to the potential flooding associated with Tropical Storm Harvey, to include Guardsmen with high water vehicles and boats prepositioned in Calcasieu, Vermillion, Orleans, Lafayette, Red River, Natchitoches, Caddo, and Rapides parishes.

In addition to vehicles and boats, the LANG has eight helicopters ready to support search and rescue and recon missions as needed. To help better assist coordination efforts at the local level, the LANG has liaison officer teams in Allen, Calcasieu, Cameron and Orleans Parishes.