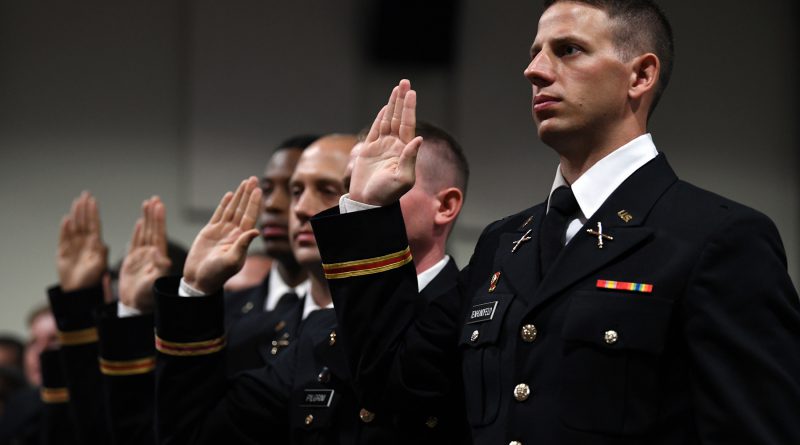 The LANG has conducted OCS since July 1960. A total of 1,737 second lieutenants have been commissioned through the school.

“I want to say congratulations to you. This is a long, grueling course and I remember it quite well. It’s tough, but you’ve now achieved something that not many people achieve,” said Maj. Gen. Glenn H. Curtis, adjutant general of the LANG, who was the guest speaker at the ceremony. “This is a team sport, and you want your team to succeed. Your success will come from your team’s success.”

While addressing the new officers, he also talked to the new lieutenants about what to expect going forward in their careers and gave them advice on how to be a good leader.

Officer candidates have the option to attend OCS as a traditional Guardsman one weekend a month and two annual training sessions over an 18-month period or attend an 8-week accelerated course.

“I’d like to thank everyone for joining us to celebrate one of the greatest achievements in our military careers and the start of new beginnings. There were no shortcuts, no pause button and no reset. You had to think quickly and plan efficiently to make it,” said 2nd Lt. Jesse Frazier, a Baton Rouge native. “Remember to always place your Soldiers first and lead with integrity and resilience, and may you always lead from the front.”

“This is probably the greatest moment of my life. It was a lot of hard work, while being tested physically and mentally,” said 2nd Lt. Payton Pilgrim, of Ball. “It just goes to show that you can do anything as long as you set your mind to it and go out there and fight for it.”

Officer candidates were presented awards for accomplishments in physical training, leadership and academics.

“It’s just surreal. I felt like I had a really hard time during OCS because it is a difficult course,” he said. “The last thing I expected was to be honor graduate.”

The National Guard Association of Louisiana Award was awarded to 2nd Lt. Natilyn Smith, of Port Sulphur, and 2nd Lt. Timothy Cavalier, of Baton Rouge, for having the highest physical training scores.

2nd Lt. Austin Pennington, of Slidell, was awarded the Academic Board Award for prowess in academics.

2nd Lt. John Williams was awarded the Erickson Award as the runner-up for top graduate.

As a reward for their hard work, Frazier, Smith and Berroteran were chosen to attend Air Assault School after graduation.

“The best advice I can give [to future officer candidates] is to run a lot before you leave,” said Berroteran. “You need to stay tough mentally because the whole thing is a big game and you have to understand the game to play the game. You need to just go in there trying not to break the rules, be professional and do what you’re supposed to do as a Soldier.”

During the ceremony, family and friends pinned gold rank insignia on the newly-commissioned lieutenant’s shoulders.

“I wouldn’t be here without my family’s love, attention, letters and general support,” said Pilgrim. “They always let me know that they are there, and to know I have that support to come home to is the greatest feeling ever.”

The mission of Louisiana’s Officer Candidate School is to train, mentor and commission the future leaders of the Louisiana National Guard.