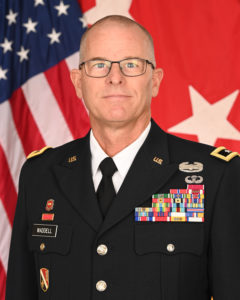 MG Waddell mobilized and served as an Engineer Battalion Commander during Operation Iraqi Freedom in Multinational Division-Baghdad. While deployed, the unit conducted construction operations in support of the 1st Cavalry Division and the 4th Infantry Division. This included construction of combat out-posts, joint security stations, rapid road repair, general engineering, and battalion support operations. The unit was awarded the Meritorious Unit Citation for its service in Iraq.

MG Waddell is a certified teacher and administrator in Louisiana. Other notable achievements include being named Louisiana High School Coach of the Year in Baseball (2003) and Basketball (2005). He was also named District Coach of the Year multiple times in a variety of sports throughout his 18-year coaching career.

MG Waddell resides in Lake Charles, Louisiana and is married to the former Lisa Doga. He is the father of three children: Kimber (Wes), Michael (Lindsey), and Kenny (Jada) and has three grandchildren: Braden, Karsyn, and Logan.