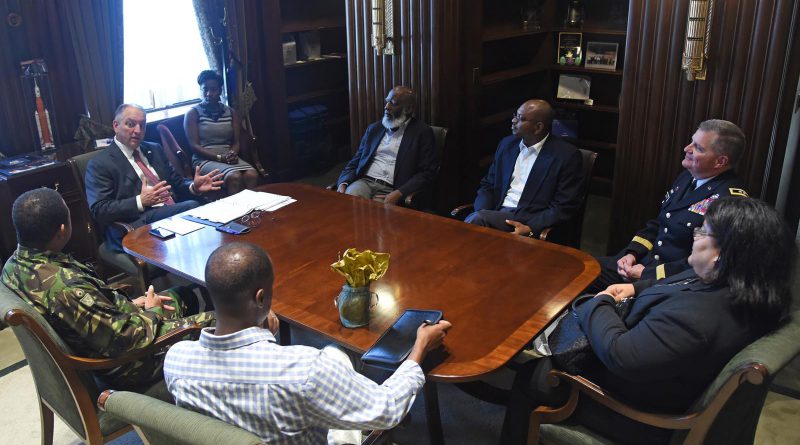 PINEVILLE, La. – The Louisiana National Guard welcomed delegates from Belize to tour the state’s Youth Challenge Programs, April 10-12. Belize is working on plans to establish a program for at-risk youth in Belize that is similar to the YCP program in Louisiana.

For more than 20 years, the LANG and the BDF have trained and worked together as part of the State Partnership Program, which is administered by the National Guard Bureau. Over the years, the two countries have participated in 257 events. The success of this partnership has now led to include programs such as YCP.

“As we move forward together, the goal is to take care of the kids in Belize, who are just as important to us as our children in Louisiana,” said Maj. Gen. Glenn Curtis, the adjutant general of the LANG. “We are committed to helping this be a success from day one should Belize see fit to start their own YCP.”

The Belize delegates toured each YCP campus in the state to gain an understanding of how the alternative education program works, which offers at-risk youth an opportunity to change their future, outside of a traditional school setting.

“Our country has been faced with an elevated level of crime the last 10 years. It’s been realized that the youth are the ones committing the crimes on the streets of Belize City,” said Jones. “There really isn’t much in terms of recreational activities or alternates to school to be involved in. Our government is looking at establishing a program like this (YCP) as a form of intervention to stop crime and violence.” Enriquez said that the end goal of Belize starting their own program is to raise the confidence and patriotism of the local youth through teaching them to believe in themselves and letting them know there are better futures in the world, regardless of their past and current situations. He also said that investing in their youth will make an impact in Belize.

“At the end of the day, everything we’ve tried has been a band-aid fix, and we need a program that will stick. This one sticks. They (the LANG) already have procedures in place and detailed documents that we can tailor to Belize’s needs, which provides us with a huge advantage,” said Enriquez. “We are looking forward to starting this program because of the relationship we already have with Maj. Gen. Curtis and the LANG. They are always willing to help us in any way they can which benefits us tremendously.”

Louisiana and Belize have expanded their relationship beyond traditional SPP exchanges to include combined leadership training opportunities and academic professional development. The LANG and BDF are planning a joint infantry training exercise in 2018 in addition to pledging support for youth development programs in Belize.

“Over the years the level of comradery and friendship between the Guard and Belize has grown,” said Maj. Allen West, the State Partnership Program director. “As Guardsmen, we don’t just have a military background, but a multitude of backgrounds that we bring to the partnership.” The purpose of the SPP is to foster mutual interests and establish habitual long-term relationships across all levels of society. The program as a whole encourages the development of economic, political and military ties between the states and partner nations. There are 76 countries across the globe partnered with 70 unique security partnerships.