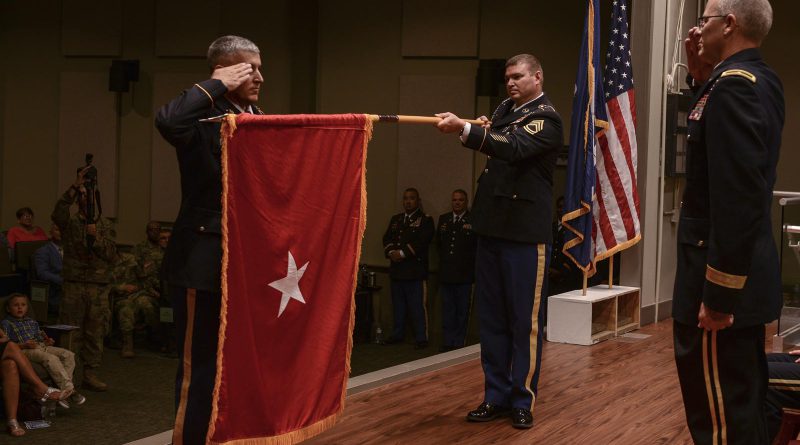 PINEVILLE, La. – After 29 years of military service, Louisiana National Guardsman Damian “Keith” Waddell was promoted to the rank of brigadier general during an official ceremony at Camp Beauregard in Pineville, Aug. 10.

With his first star, Waddell, a New Roads native, inherited the role of assistant adjutant general for the LANG, which serves as the principal advisor to the adjutant general and is responsible for assisting in the deployment and coordination of programs, policies and plans for the Louisiana Army and Air National Guard.

“I am honored to be here today to finally get you to the rank that you deserve,” said Maj. Gen. Glenn H. Curtis, the adjutant general of the LANG. “To reach the rank of general officer in the U.S. Army is not easy, and he didn’t do it alone. Keith has a great support network in his family, and I’d like to thank them for supporting him through the years.”

Waddell graduated from Louisiana State University with a Bachelor of Science in Physical Education and a minor in General Science. He also earned his commission through the school’s Reserve Officer Training Corps. He received a Master’s degree in Strategic Studies from the United States Army War College and is currently working on a Master’s of Science in Homeland Security from Northwestern State University.

After graduating from LSU, he served in the Army on active duty for four years before joining the LANG in 1995. When he left active duty, he also became a certified teacher and began his career in education in Beauregard Parish. Waddell taught in Beauregard and Vernon Parish before working in Calcasieu Parish, where he has been for the last 12 years.

Over the course of his career in the LANG, Waddell has served in various leadership positions and staff assignments at the company, battalion and brigade levels. Most notably, he commanded the 769th Engineer Battalion, the 139th Regional Support Group and the 256th Infantry Brigade Combat Team. He also served as the joint director of military support for Louisiana.

“Keith has always had a dedication to his units and the organization,” said Curtis. “He always gives sage advice and was always someone I could go under a shade tree with to bounce ideas off of when I didn’t know what to do. Sometimes he told me things I didn’t want to hear, which is admirable. But he’s always been a waypoint for me.”

As a longtime teacher and coach, Waddell has a unique skillset that he brings to the military in his ability to use his education experience to have a better connection with his Soldiers, in turn making him a better leader.

“It’s been a perfect fit to help me relate to the younger Soldiers that make up the majority of our National Guard,” said Waddell. “I’ve always found it important to bond with my Soldiers, and my career at school dealing with teenagers allows me to connect with my Soldiers that are close to that age whether it’s through music, sports or video games.” “Leadership is all about impact, and to make a difference you have to empower people and understand what you’re trying to do,” said Waddell. “You’ve got to get everybody headed in the same direction and be open minded, have a positive outlook and collaborate with people. This is a formula that has worked well for me throughout my career.”

He has also received the General Douglas MacArthur Leadership Award, the Louisiana National Guard Outstanding Company Commander in the Engineer Regiment, the Bronze de Fleury Medal and the Order of St. Maurice (Legionnaire).

Waddell and his wife, Lisa, reside in Lake Charles. In addition to their three children, they also have three grandchildren, Braden, Karsyn and Logan.