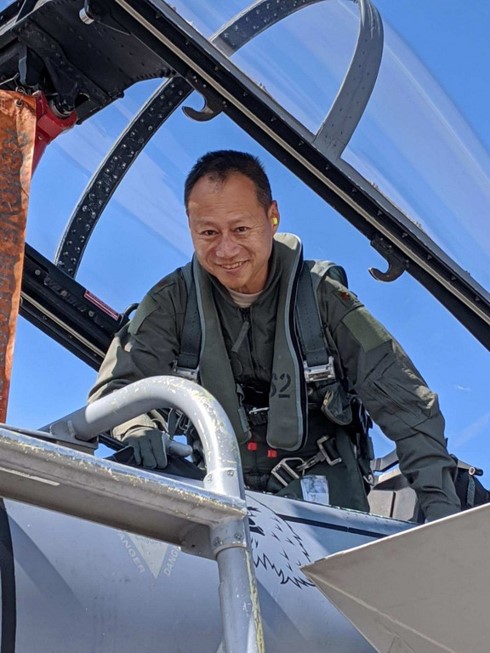 Maj. John “Jet” Li is a flight surgeon in the Louisiana National Guard’s 159th Fighter Wing and a resident of West Palm Beach, Florida. He moved from Taiwan to the U.S. as a child and led his life achieving many career goals that children make when they are growing up.

Li said his family in Taiwan was poor, and his parents moved to the U.S. for a better life when he was one year old and left him with his grandparents. They flew him to the U.S. when he was 5 years old to join them once they had saved enough money to fly him over.

“Ponca City, Oklahoma was not a super Asian-friendly place to grow up at the time,” said Li. “I got beat up every day by this one kid until I figured out that he liked airplanes, so I made him paper airplanes. I guess he found that entertaining, because then he stopped beating me up and actually protected me from the other kids.”

“Ever since I was a little kid, I’ve wanted to do something with the military. I wanted to fly fighter jets or be an astronaut or a doctor, but at the time, my eyes were too bad to fly,” said Li. “This was at a time before LASIK was invented and at a time where you needed 20/20 vision to fly a fighter jet.”

Since flying fighter jets was off of the table, he instead decided to go to medical school and became an ear, nose and throat surgeon. As a doctor and surgeon, Li racked up several accolades for his work. He also developed or co-developed a multiaxial positioning device that facilitates the Canalith Repositioning Procedure, a special micro-catheter used to deliver inner ear medication and the Micromax surgical drill, used by major hospitals for ear surgeries. Li also holds a patent for a balance forceplate that is used for vestibular rehabilitation.

Through his success in the medical world, the desire to fly never left Li, and he began a business building flight simulators that would eventually pull in some unexpected customers.

“Because I loved airplanes, when we were little we started with a cardboard box and made engine rumbling noises. From there, we would build a wooden cockpit and later on, fiberglass cockpits,” said Li. “Fast forward to now … I actually have a business with a surplus of F-16 and F-18 cockpits sitting in my living room. It’s been a crazy ride.”

His love of airplanes did lead him to get his pilot’s license on the civilian side, but Li said that the technology he uses on the medical side is what inspired him to start building flight simulators on a commercial level.

While working on a patent for a device used to test the balance of people with vertigo, Li connected with an engineer that was working with force transducers to build F-16 simulators, and that relationship turned into a business where the pair builds parts for both simulators and real aircraft.

“It’s kind of strange going from building rinky-dink toys to getting calls from NASA, Boeing, Lockheed Martin and the actual Air Force,” said Li. “What’s also cool is that the movie industry has also been calling us. We’ve built things for Marvel Universe and the new Top Gun movie that’s coming out, and it’s pretty cool to see our stuff on screen.”

Even after accomplishing his early life goals of becoming a successful doctor and surgeon, flying airplanes, becoming a certified parenting instructor to help families and launching a lucrative business in flight simulation technology, Li still had one unrealized dream that he hadn’t checked off.

“I realized that the window to join the military was rapidly closing,” said Li. After interviewing for a few positions and being turned away from a few positions due to age or positions being filled before he could join, author John C. Maxwell connected Li with a general officer who wrote a letter on his behalf, which led to Louisiana Air National Guard Col. Joseph Danford reaching out to him.

Although not a military fighter jet pilot, Li is qualified as a flight surgeon to fly the jet in the back seat. It’s important that flight surgeons fly the aircraft from the back so they can experience the environment that flight crews endure and better understand how to diagnose pilots in case of an injury.

“To be honest with you, it’s the people that make it [serving in the National Guard] for me,” said Li. “When I came in, my goal was to fly the jet. Now that I’ve done that, if you told me I could never fly again, I would stay in because I like the people so much.”

Li is currently on his first deployment to Langley Air Force Base in Hampton, Virginia with the 159th as the squadron’s flight surgeon.