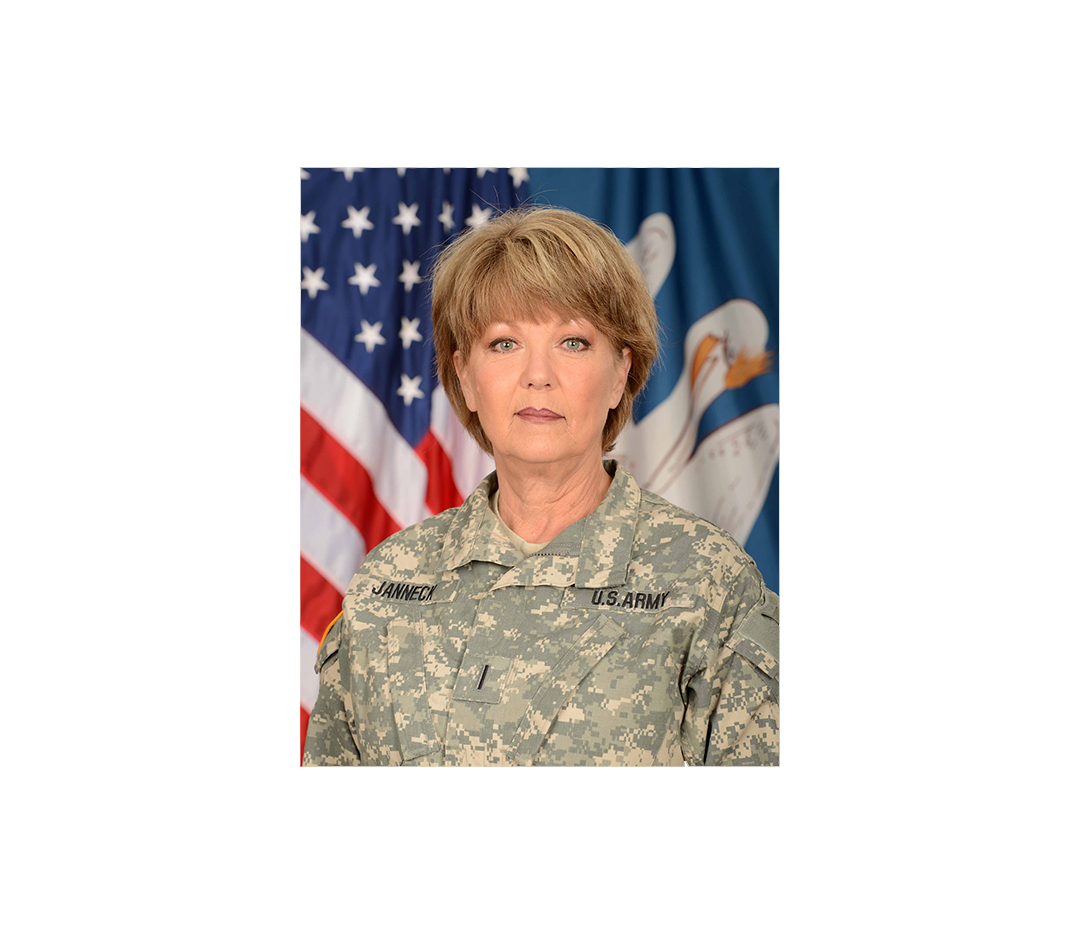 “Kim has been a trail blazer her entire career. She was one of the first females in the Louisiana National Guard to achieve the rank of Chief Warrant Officer 5, which speaks volumes about her service,” said Maj. Gen. Glenn H. Curtis, adjutant general of the LANG.

Janneck began her career as a civilian with the Department of Agriculture in 1973 right out of high school. In 1978 she began working with the Louisiana National Guard as a federal technician, but it wasn’t until 1986 that she finally decided to enlist in the LANG. Janneck will retire with 36 years of federal service and 27 years in the Guard.

“I decided that at the age of 30, I couldn’t wait anymore and it was time to do it,” she said. “I enlisted under the [Army] Civilian Acquires Skills Program.”

Janneck graduated from basic training at Fort Dix, N.J., in September 1986. Two years later she graduated first on the commandant’s list from the Reserve Component Warrant Officer Entry Course, then as the distinguished honor graduate from the Personnel Officer Warrant Officer Basic Course.

Since graduation, she has never looked back.

“Kim’s impact on the Guard and the warrant officer corps will be remembered for years to come,” said Curtis.

Janneck’s time in the LANG has had a profound impact on her life. She said that the Guard helped her develop her core values, find her leadership style and strengthen her relationships with family and friends.

“Warrant officers are our technical experts. They are leaders … they are a unique and special group of individuals. I still don’t know why everyone doesn’t want to be a warrant officer. I think it’s the greatest place to be,” she said. “It’s my hope that these young Soldiers out here – if they love what they do and are good at what they do – the warrant officer path is what they [will choose] to pursue.”

Janneck’s love for the family she found in the military is evident as she described the close bond she shares with members of the National Guard and the warrant officer corps.

“I have never seen a tighter group of individuals than the warrant officer corps. Aviators are very tight. Tech warrants are tight, but when you put the whole 200 in a group, we are one corps. It is just amazing to me,” Janneck said. “It is like a family in the family.

A long time native of New Orleans, Janneck said the military opened many doors for her to serve her community, her state and her nation.

“What we do for the communities and our state and our nation is what makes me proud to be a Guard member and is something that I will miss terribly.”

A chief warrant officer 5 is a master-level technical and tactical expert who performs the primary duties of technical leader, manager, integrator, advisor, or any other particular duty prescribed by branch. A CW5 provides direction, guidance, resources, assistance and supervision necessary for subordinates to perform their duties.

“I will say that I am so blessed to have been given this opportunity to be the command chief warrant officer of the state. I am so proud to be in this position and will truly, truly miss every single person associated with the Louisiana National Guard, and I will miss this family … I am definitely leaving home,” said Janneck.